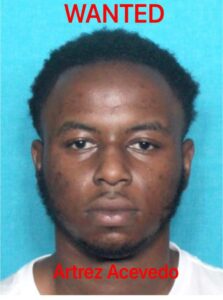 Press Release
On December 12, 2021 at approximately 3:58 pm, deputies responded to a shooting that occurred at Birdie’s Convenience Store located at 2014 W. Main Street in Lutcher, LA. When deputies arrived on scene, they discovered a 17-year-old male had been shot multiple times. The victim was shot outside of the store in the parking lot. Acadian Ambulance was dispatched to the scene, but before arriving the victim was taken by personal vehicle to St. James Hospital. The victim was stabilized and transferred to University Hospital in New Orleans and is in critical condition. Detectives investigating the shooting have issued an arrest warrant for Artrez Acevedo (DOB 09/12/2001, Gramercy, LA) charging him with one count of attempted second-degree murder. Artrez Acevdeo is currently at large. Anyone knowing his whereabouts should contact Crime Stoppers at 504-822-1111 or the St. James Parish Sheriff’s Office at 225-562-2200.
Released By: Sheriff Willy Martin, Jr.