FirstNet Steps Up to the Plate for Christmas Eve

FirstNet, Built with AT&T, deployed one of its Sat COLTs, (Satellite Cell On Light Trucks),  in St James Parish on LA 3193.  The Sat COLT will provide dedicated access for communications on BAND 14 devices to public safety on Christmas Eve.  We all know with the influx of visitors on Christmas Eve, trying to make a call or send a text becomes nearly impossible.  FirstNet gives public safety priority, preemption, more network capacity and a resilient, hardened connection.  Thank You FirstNet for stepping in and ensuring we can maintain communications during this event. 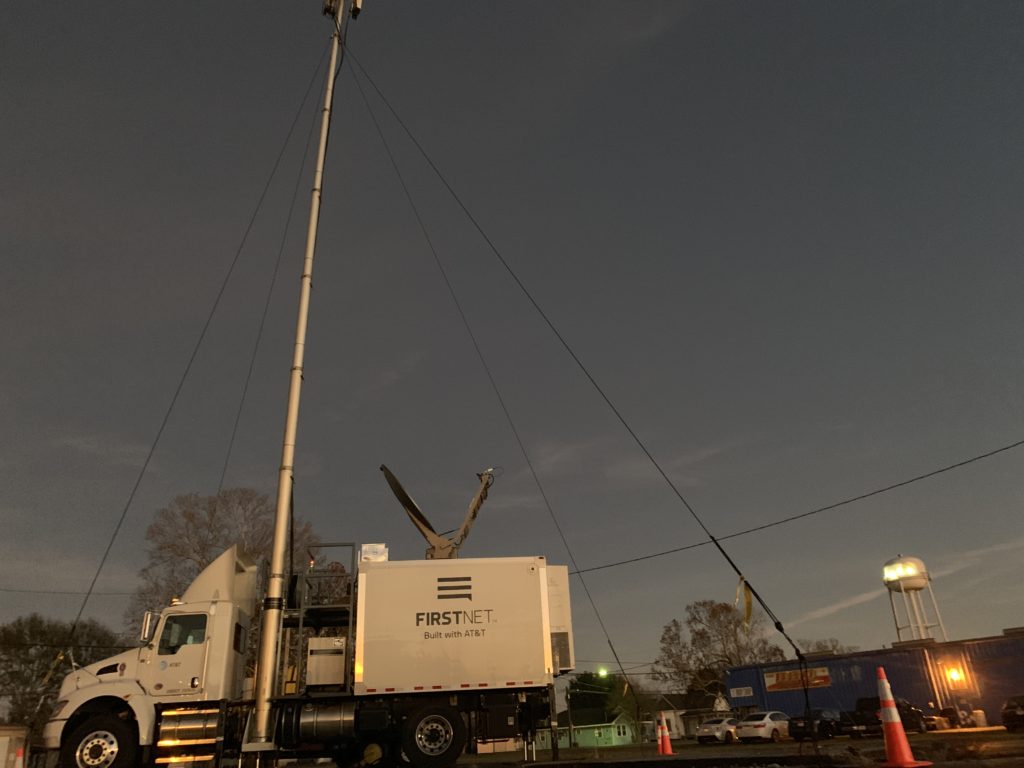 FirstNet was created to be a force-multiplier for first responders – to give public safety 21st century communication tools to help save lives, solve crimes and keep our communities and emergency responders safe. To do that, FirstNet will build a new Band Class 14 network designed to be reliable, functional, safe and secure, and provide optimal levels of operational capability at all times. For the first time, public safety communications will be based on commercial standards. This will bring the benefits of lower costs, consumer-driven economies of scale and rapid evolution of advanced communication capabilities.

Built for and by public safety

The 9/11 terrorist attacks brought to the forefront the many communications challenges that first responders face during emergencies and disasters. These issues were captured in the 9/11 Commission Report, which identified gaps in emergency communications and recommended a nationwide network for law enforcement, fire, and emergency medical personnel communications. The public safety community united to fulfill the 9/11 Commission’s recommendation. Public safety organizations and associations advocated before Congress for a dedicated, reliable wireless network for first responders. Their advocacy efforts led to the passage of legislation in 2012 to create the First Responder Network Authority to deploy the FirstNet network in all U.S. states and territories, including rural communities and tribal nations.

Based on public safety’s needs and vision

Public safety officials have worked closely with the First Responder Network Authority since its inception in 2012 to ensure the Network meets first responders’ needs – today and in the future. The agency’s outreach and consultation efforts have connected the organization to more than 1.8 million first responders and state public safety and technology executives across the country. Specifically, the First Responder Network Authority has consulted extensively with state single points of contact (SPOCs) in each of the 50 U.S. states, 5 territories, and the District of Columbia, as well as local/municipal, tribal and federal public safety leaders. It also coordinates with public safety through the Public Safety Advisory Committee (PSAC), which provides guidance and subject matter expertise from a first responder perspective. Public safety leaders at the national, state and local levels continue to advocate for and support deployment of the FirstNet network.

Today, in emergencies and at large events, heavy public use can lead to wireless communications networks becoming overloaded and inaccessible. In those instances, public safety users are treated the same as any other commercial or enterprise user, and communications can be limited due to congestion and capacity issues. With the FirstNet Network, public safety gets a dedicated “fast lane” that provides highly secure communications every day and for every emergency. FirstNet delivers specialized features to public safety that are not available on wireless networks today – such as priority access; preemption; more network capacity; and a resilient, hardened connection. The network is delivering more than just a public-safety-dedicated wireless connection – it is also creating devices and apps ecosystems that will connect first responders to innovative, life-saving technologies.

FirstNet is improving communications to allow for improved response times and outcomes for first responders from coast-to-coast, in rural and urban areas, inland and on boarders – leading to safer, and more secure communities. It provides innovation and dedicated capacity so public safety can take advantage of advanced technologies, tools and services during emergencies, such as:

The First Responder Network Authority oversees the testing and validation of the network, as well as the products and services before they are deployed so first responders will have the proven tools they need in disasters and emergencies. Through our FirstNet Innovation and Test Lab in Boulder, CO, we are testing capabilities unique to public safety.

The First Responder Network Authority and AT&T are modernizing and improving public safety communications by leveraging private sector resources, infrastructure, and cost-saving synergies to deploy and operate the Network. This public-private partnership model also helps keep costs down for American taxpayers. To do this, Congress used the sale of communications airwaves (or spectrum) to fund FirstNet’s initial operations and help start network deployment; the $7 billion FirstNet received in initial funding came from FCC spectrum auction revenue, not taxpayer funds.

If the federal government were to build, maintain and operate this network, the estimated cost would be tens of billions of dollars over 25 years. The Government Accountability Office has estimated it could cost up to $47 billion over 10 years to construct and operate the Network. With this partnership approach, the First Responder Network Authority and AT&T do not need any additional federal funding to build and operate the Network – it is a fully funded, self-sustaining Network. In return, America’s first responders get services far above and beyond what they have today over a first-class broadband network dedicated to their communications needs.

The partnership approach gives a fully-funded, self-sustaining network that will serve public safety for years to come. This business model is built upon the efficient use of resources, infrastructure, cost-saving synergies, and incentives, including:

Delivering on the FirstNet promise

All 50 states, five U.S. territories and Washington, D.C., have “opted in,” to FirstNet, meaning each has accepted its individual State Plan detailing how the network will be deployed in their state/territory.

The First Responder Network Authority’s public-private partnership with AT&T provides first responders with immediate access to mission-critical capabilities over the FirstNet network. This includes priority and preemption features that give first responders their own “fast lane” on the public safety network to communicate and share information during emergencies, large events, or other situations when commercial networks could become congested. Key activities include: