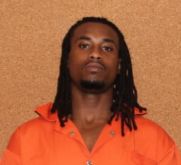 The St. James Parish Sheriff’s Office has arrested the individual wanted for the murder of Jarrell Jones and the shooting of Jeremy Antoine Smith that occurred on November 13th, 2016 in Vacherie, LA.  Jyran McGee (DOB 05/22/1991) has been charged with LA R.S. 14:30.1 Second Degree Murder and LA R.S. 14:27.30.1 Attempted Second Degree Murder.  The arrest was carried out by the United States Marshals  Service in New Orleans, LA on Tuesday, January 10th, 2017.  Jyran McGee was booked as a fugitive in the Orleans Parish Prison and transferred to the St. James Parish Sheriff’s Office Jail on January 11, 2017 where he is awaiting the setting of bond.  The murder / shooting took place at approximately 1:46am in the parking lot of the Good Children Hall in Vacherie, LA.  At the time of the shooting, the victims were sitting in a vehicle after visiting L&M bar and were preparing to leave when they were shot.  Both victims were taken to St. James Parish Hospital and transferred to University Hospital in New Orleans.  Jarrell Jones succumbed to his wounds and died at University Hospital.