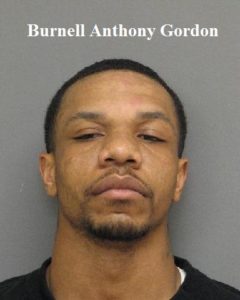 On June 15th, 2016 at approximately 12:33am, the St. James Parish Sheriff’s Office responded to a shooting that occurred at 2373 N. Courseault Street in Lutcher, LA.  Responding deputies discovered that one individual had been shot and was taken to St. James Hospital by a family member.  The victim, Darell Antione Johnson (19 years old), was pronounced dead at the hospital after medical staff fought to save his life.  Detectives have identified the suspect wanted for the murder of Darell Johnson as being:  Burnell Anthony Gordon (B/M, DOB 08-25-1981, address: 2445 Central Street, Lutcher, LA).  Burnell Gordon has arrest warrants issued against him that charges him with:  LA R.S. 14:30.1 Second Degree Murder and LA R.S. 14:95.1 Carrying of a Firearm by a Convicted Felon.  Anyone knowing the whereabouts of Burnell Gordon should contact the St. James Sheriff’s Office at 225-562-2200.  Crime Stoppers has also offered a $2,500 reward.  Individuals can call in anonymously at 1-877-903-STOP.